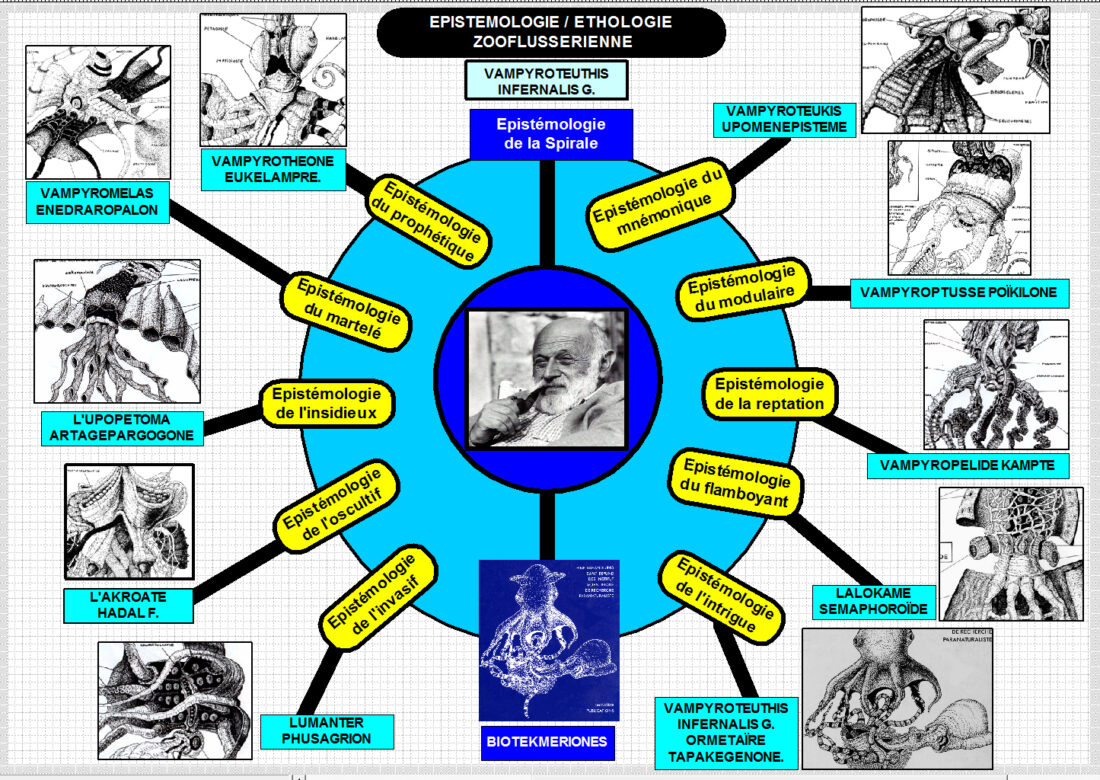 BODENLOS. VILÉM FLUSSER AND THE ARTS

The exhibition “Without Firm Ground: Vilém Flusser and the Arts” at GAMU, Prague presents the life and thoughts of one of the most acclaimed Prague-born intellectuals of the 20th century through the combination of rare documents and artistic collaborations and inspirations. It aspires to weave the threads of Flusser’s private and professional life, marked by various migrations, with those of his thinking and writing through dialogues, influences and collaborations. Following presentations at ZKM Karlsruhe, AdK Berlin and West Den Haag, the next stop of this unique project takes place in Flusser’s native city, adapted and enriched with local ties.

Vilém Flusser was born in the Bubeneč district of Prague in 1920 and was educated in a middle class Jewish intellectual family. In 1939, after the occupation of the Germans, he fled with his wife-to-be, Edith Barth, first to London, and eventually to Sao Paulo Brazil where he would live for over thirty years. Flusser brought his training in the classics, in Enlightenment Humanist philosophy and literature, to bear on his new environment, revelling in the utopian promise of the radically alien modernity into which he was thrown. Fighting through the despair of the extermination of his family and the horror of the Holocaust, Flusser carved out scintillatingly original, uncompromising philosophical insights into a world of scientific progress, automation and migration. During the 1980s he became one of the most respected philosophical guides of the upcoming electronic era. Even though he died only at the dawn of the Internet age his understanding of networks and communication is every bit as insightful to our contemporary condition as it was then. Through his life, Vilém Flusser sought a new utopian form of thinking, emerging from the crushing disappointment of modernity. He called this “synthetic thinking” using “technical images”. The exhibition will feature, beside biographical trajectories, objects from Flusser’s archive, his typoscripts and positions from artists who knew and loved him, some unique artistic collaborations where he would attempt to enact and elaborate the utopian modes of “synthetic thinking” he described. The selection of artists influenced by Flusser includes renowned personalities of Louis Bec, Michael Bielicky, Fred Forest, Harun Farocki, Joan Fontcuberta, Jiří Hanke, Dieter Jung, Martin Kohout, Andreas Müller-Pohle, Lisa Schmitz, Jiří Skála, among others.

An essential part of this exhibition project, the international symposium “Playing against the apparatus. Vilém Flusser’s media and culture philosophy”, will be held on April 7th – 8th, at Goethe-Institut in Prague and Charles University in Prague (Faculty of Arts). We will rework some of the themes in the exhibition: migration, technological change, the crises of writing, causal thinking and the humanist project.  We explore Flusser’s utopian proposals for new humanisms and new modes of information and communication for our contemporary condition of rapid technological transformation, playing with and against the apparatus. Join us for a rich and invigorating adventure through the life and work of a Czech pioneer of media thinking and philosophy for our networked age! The exhibition is held in collaboration with the Vilém Flusser Archiv/ Universität der Künste Berlin.

(entrance from the passage to Tržiště Street)
open daily except Monday: 1 – 7 pm